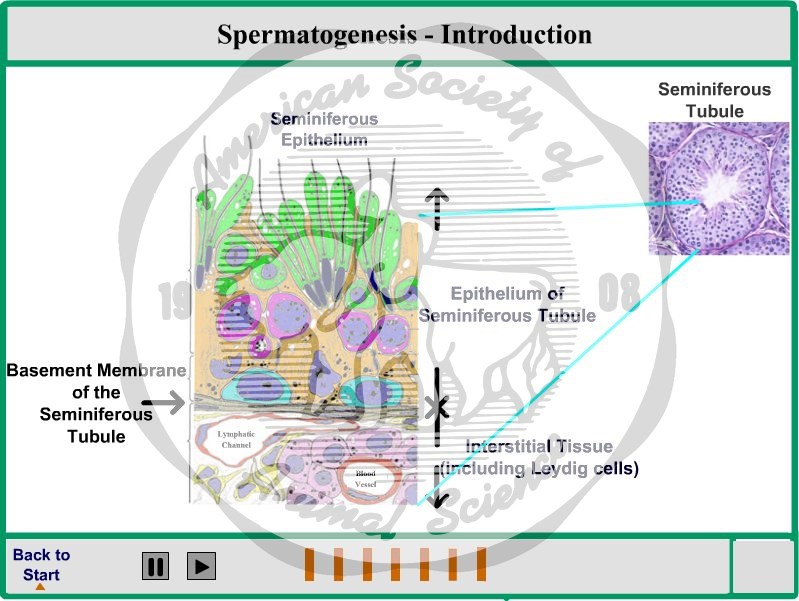 Description: This zip file contains a 13-minute Flash (swf) narrated animation of spermatogenesis in the bull (Spermatogenesis Animation.swf) and two Word (.doc) files. The animation illustrates and describes the location of spermatogenesis within the seminiferous tubules of the testis, in addition to the interstitial tissue where Leydig cells produce testosterone. Animations capture each step of spermatogenesis from the perpetual renewal of spermatogonia stem cells on the basement membrane of the tubules, commitment of spermatogonia to enter spermatogenesis, mitotic division of spermatogonia to form primary spermatocytes, meiotic division to form secondary spermatocytes and spermatids, spermiogenesis wherein the spherical (often referred to in the literature as round) spermatids mature to form spermatozoa, culminating with spermiation. This entire process is nurtured by Sertoli cells that completely envelop the spermatogonia, spermatocytes, and spermatids from the first cell division until the sperm are released into the lumen of the seminiferous tubules, approximately 61 days in bulls. Tight junctions among the Sertoli cells form a basal compartment next to the basement membrane of the tubule with an environment required for the early stages of spermatogenesis, and an adluminal compartment with an environment prerequisite for the later stages of spermatogenesis. When spermatid maturation is complete and spermatozoa are released from Sertoli cells, fluid produced within the tubules transports sperm throughout the length of the tubules and out of the testis into the efferent ducts, converging in the epididymal duct forming the major functional element of the epididymis. Sperm leaving the seminiferous tubules are infertile. Maturation of sperm occurs in the epididymis where they develop the capacity to fertilize an egg and for motility as described in the video file NAL #3259 “Sperm Maturation in the Male Reproductive Tract- Development of Motility”. The “Spermatogenesis Animation Installation-swf.doc” file contains instructions for installing and using the animation and the “Spermatogenesis Narration Text – swf.doc” contains the text of the narration. Although this is the appropriate file for those intending to use the animation for teaching, this animation is also available (NAL #5149) as an uncompiled .fla file to give those with access to the Adobe Flash program the ability to change the animation.