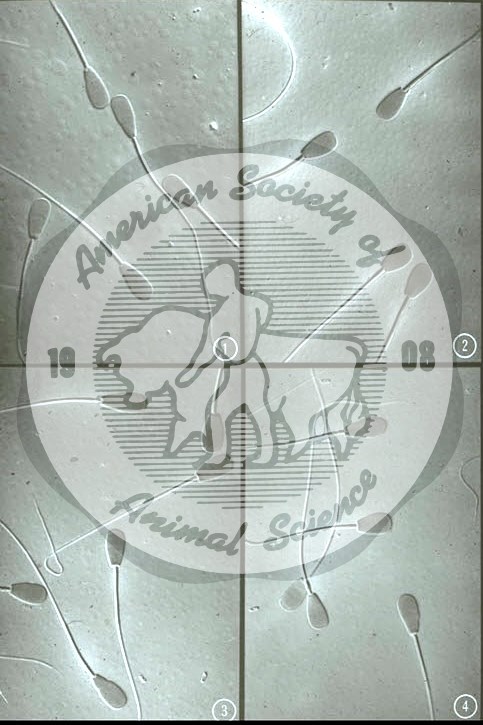 Variations in sperm shape and size

Description: Differential interference contrast micrographs of sperm from bull 1 (image 1) and sperm from bull 2 (image 2). On the average, bull sperm heads are flat, about 10 microns long, 5 microns wide and 0.5 micron thick. However, as the present images illustrate, the shape and dimensions of sperm may vary among bulls. Sperm heads from bull 1 are more elongated, while those from bull 2 are shorter. They are two morphologically distinctive populations of sperm heads. An experienced technician can easily distinguish between sperm from these two bulls, even when the two populations of sperm are mixed in equal proportions as shown in images 3 & 4. Morphological differences such as those illustrated here may be related with high or low fertility. In addition, morphologically different sperm have been used experimentally to determine that some bulls' sperm have a competitive advantage in penetrating the zona pellucida of an ovum (Munkittrick et al, J. Dairy Sci. 75: 725, 1992). NAL #5087 illustrates greater structural details of sperm.