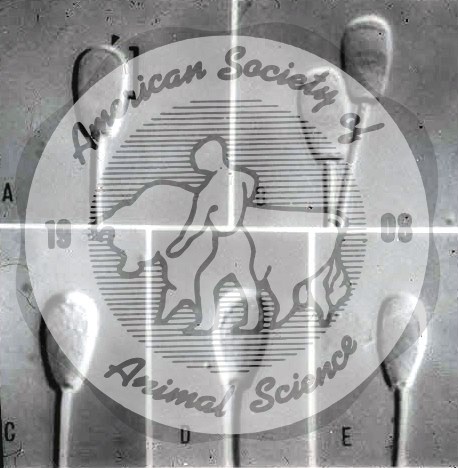 Description: These differential interference contrast micrographs of bull sperm from five ejaculates reveal changes in acrosomal morphology caused by sperm metabolism and resultant reduced pH. The average bull sperm head is flat, about 10 microns long, 5 microns wide and 0.5 micron thick. For normal sperm as in image A at pH 6.8, the entire surface of the acrosome (bracket) is smooth, including the margins of the crescent-shaped apical ridge (arrow). Changes observed after the pH fell to values between 6.0 and 5.5 include varying degrees of swelling of the apical ridge (e.g., images B, C, D, & E), irregularities on the surface of the acrosome (e.g., image C & D), and accumulation of irregularities along the posterior margin of the apical ridge (e.g., image B). Because these changes are associated with reduced fertility, in commerce partially extended semen is cooled to near 5 degrees C within about 30 minutes. This reduces the rate of sperm metabolism, minimizes changes in acrosomal morphology, and optimizes fertility. The acrosomal characteristics in these images routinely are included in evaluating semen quality in commercial artificial insemination laboratories. NAL #5087 illustrates greater structural details of sperm. (E. P. Aalseth & R. G. Saacke; J. Reprod. Fertil. 74: 473, 1985 and 81: 625, 1987)