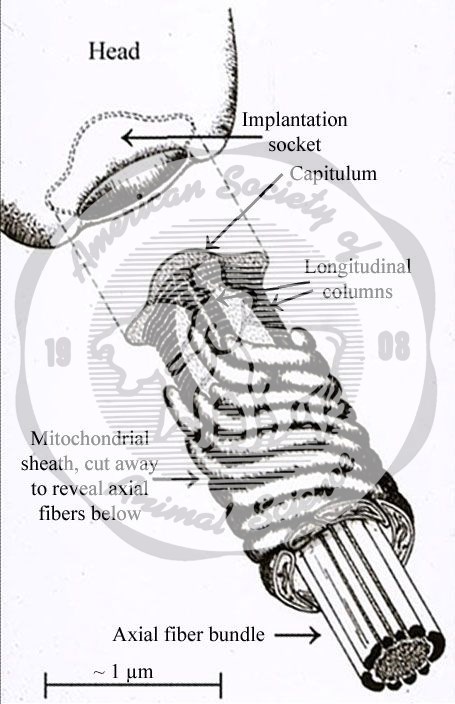 Description: A three dimensional graphic illustration based upon electron microscopy. Bull sperm heads are flat, about 10 microns long, 5 microns wide and 0.5 micron thick. The tail (flagellum) including the middle piece is about 60 to 70 microns long. It tapers from about 0.75 micron in diameter at the middle piece to about 0.25 micron at the proximal terminal piece. The head is covered by a double-layered plasma membrane that is contiguous with that over the tail. The nucleus tapers from about 0.2 micron thick at the tip of the head to about 0.5 micron at the base. It is enveloped by a double-layered nuclear membrane. The acrosomal cap, covering about 60% of the head, consists of two layers separated by ground substance. The post-acrosomal cap covers the remainder of the head, and an implantation socket at the base of the head forms an anchor for the capitulum on the tail. The tail consists of the middle piece about 10 microns long, the principal piece about 50 microns long, and the terminal piece about 5 microns long. The middle piece is surrounded by the mitochondrial sheath, a helix that contains the sperm's metabolic machinery. The capitulum at the proximal end of the tail fits snugly into the implantation socket at the base of the head, but this connection sometimes fails. The capitulum also apparently anchors the proximal ends of the axial fiber bundle that consists of 9 dense outer fibers surrounding 9 smaller doublets and a central pair (9 + 9 + 2), as illustrated at the cut ends in images 3 and 4. The 9 large outer fibers gradually disappear as they proceed down the principal piece of the tail until none is found in the end piece. Each smaller doublet consists of a small A tubule and a larger B tubule, with an attached dyneim arm that energizes sperm motility. Collectively, the 9 doublets and the 2 central fibers constitute the axoneme within the sperm tail, the contractile mechanism that powers sperm motility. This 9 + 2 fiber arrangement also is found in flagella of most other organisms.