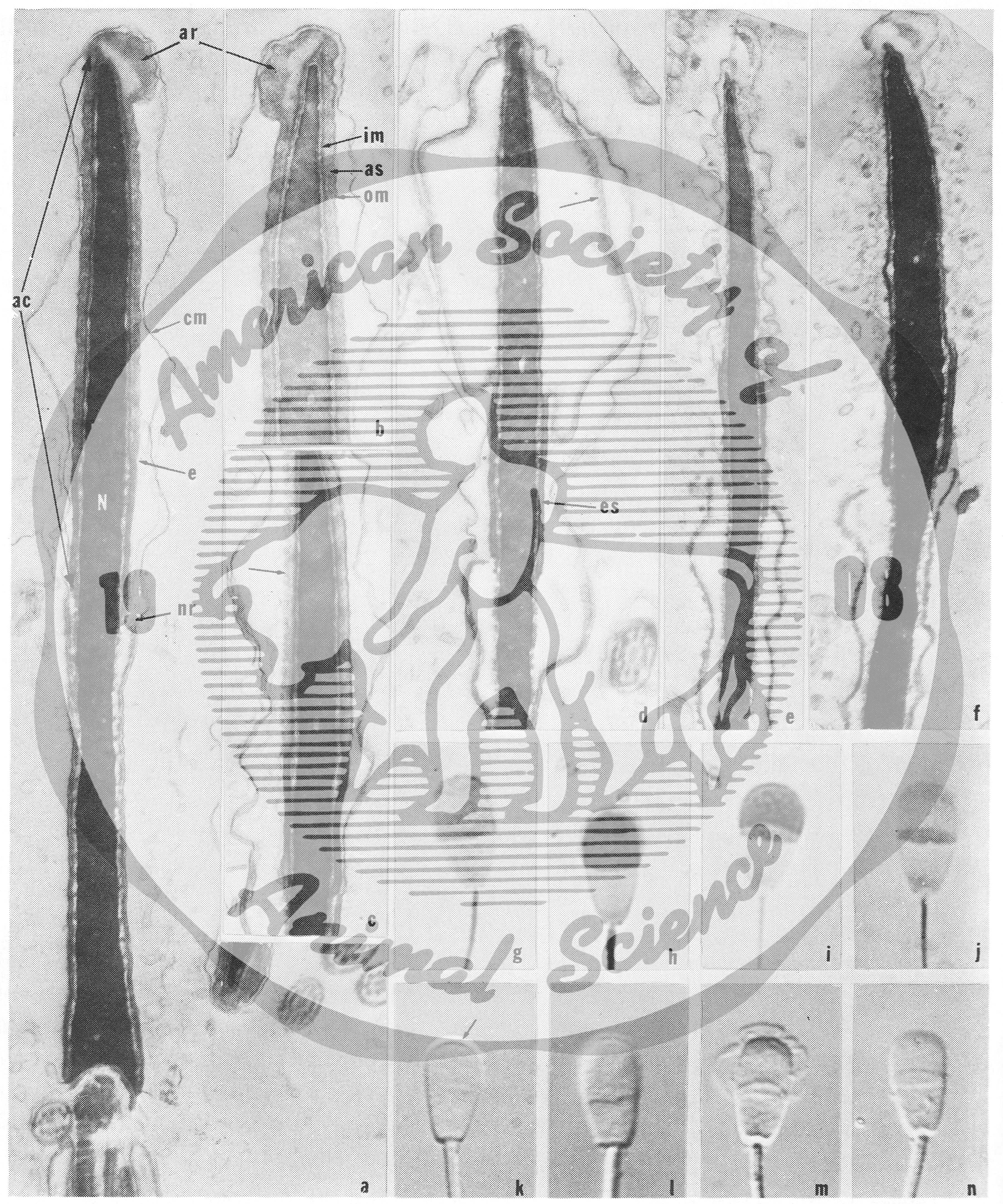 Description: Since sperm begin to age immediately following ejaculation, an extender is added to semen for artificial insemination to delay deterioration and extend the fertile life of sperm. The morphological changes that occur during ageing have guided development of semen extenders and serve as markers for semen quality. This file contains 14 images of bull sperm during ageing. Bull sperm heads are flat, about 10 microns long, 5 microns wide and 0.5 micron thick. Images (a) through (f) are electron micrographs of sagittal sections of the thin perspective of sperm heads during ageing in vitro. Image (a) illustrates the acrosome (ac) over the anterior half of the head, the apical ridge (ar), the cell membrane (cm), acrosomal swelling (e), the nuclear ring (nr) at the posterior end of the acrosome, and the nucleus (N). The post-nuclear cap (not labeled) is evident in the posterior half of the head. Image (b) shows the apical ridge (ar) and the layers of the acrosome - the acrosomal inner membrane (im), the outer membrane (om) and the acrosomal ground substance (as). In image (c), the acrosomal membrane (arrow) has begun to deteriorate, prior to loss of the cell membrane. The arrow in image (d) shows swelling under the acrosomal cap above the equatorial segment (es), before the outer membrane completely deteriorates as in (e) and (f) where the ground substance has dispersed and the cell membranes are lost. Images (g) though (n) are light micrographs of the thick perspective of sperm heads during ageing in vitro. Bright field micrographs of stained sperm (g) through (j) reveal progressive deterioration of the acrosome, first with increasing staining intensity in the anterior part and formation of the equatorial segment, followed by loss of staining intensity in the anterior part. Differential interference contrast micrographs of sperm (k) through (n) show similar progressive acrosomal deterioration. The arrow in (k) points to the apical ridge, normally observed in all motile sperm. Loss of the apical ridge (l), formation of the equatorial segment (l, m) and deterioration of the outer membrane of the anterior acrosome (m, n) typify progressive stages of sperm ageing.