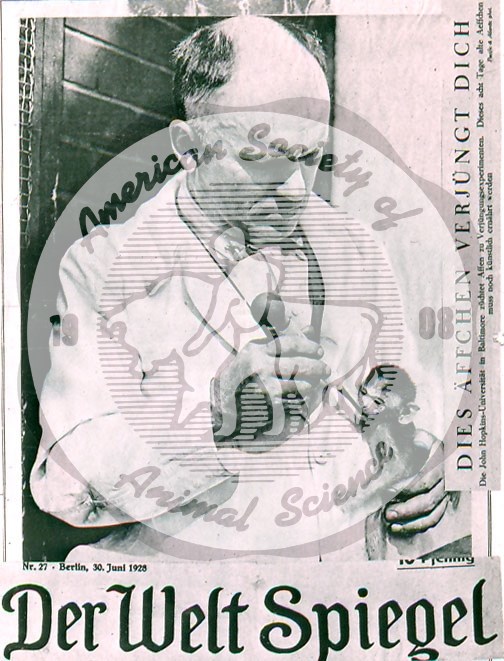 Description: Carl G. Hartman, born June 3, 1879 in Reinbeck, Iowa, was a pioneer in reproduction research. When in 1916 he became an instructor at the University of Texas, his contract specified that he would study the embryology of the opossum at his own expense. He himself captured his experimental animals, and he was their caretaker. Hartman's studies of the opossum, most published between 1918 and 1929, are classical examples of descriptive biology at its very best. Later, he worked at Johns Hopkins University, The Carnegie Institution of Washington, The University of Illinois, and the Ortho Research Foundation. This image of Hartman (Der Welt Spiegel, Berlin, 30 June 1928) holding a baby monkey was taken early during the period when he published pioneering studies of primate reproduction. His 1932 classical monograph on reproduction in Macacus rhesus paved the way for modern research on primates. In a 1933 publication, Hartman was one of the first to suggest use of steroids for birth control in women. Despite his expanding research with primates, he maintained his interests in the opossum. For example, his monograph "Possums" (174 pp, 1952) included their habits in nature and a popularized summary of opossum reproduction, as well some recipes to cook them! Among his 238 publications (see U.S. Public Health Service Publication No. 1281, 1965), his book "Science and the Safe Period" (264 pp, 1964) reflected his deep concern about overpopulation. Hartman was elected to the National Academy of Sciences in 1937. In 1964, the Society for the Study of Fertility awarded the Marshall Medal to Hartman, their highest honor. Beginning in 1969, the most prestigious annual award given by the Society for the Study of Reproduction was named for Carl Hartman. He died on March 1, 1968, aged 88. More details of his illustrious career may be found in Biology of Reproduction 1970 Vol. 2, pp 1-4.